The Beekeepers Apprentice, or On the Segregation of the Queen: Mary Russell and Sherlock Holmes, Book 1

Laurie R. King,Jenny Sterlin,Macmillan Audio Oct 22, 2021 Laurie R. King,Jenny Sterlin,Macmillan Audio
This program includes a preface read by the author. From New York Times best-selling author Laurie R. King comes the book that introduced us to the ingenious Mary Russell - Sherlock Holmes mysteries.  In 1915, Sherlock Holmes is retired and quietly engaged in the study of honeybees when a young woman literally stumbles into him on the Sussex Downs. Fifteen years old, gawky, egotistical, and recently orphaned, the young Mary Russell displays an intellect to impress even Sherlock Holmes - and match him wit for wit. Under his reluctant tutelage, this very modern 20th-century woman proves a deft protégée and a fitting partner for the Victorian detective.  In their first case together, they must track down a kidnapped American senator's daughter and confront a truly cunning adversary: a bomber who has set trip wires for the sleuths and who will stop at nothing to end their partnership.  Full of brilliant deductions, disguises, and dangers, this first book of the Mary Russell - Sherlock Holmes mysteries is "wonderfully original and entertaining...absorbing from beginning to end." (Booklist). Named "One of the Century's Best 100 Mysteries" by the Independent Mystery Booksellers Association. 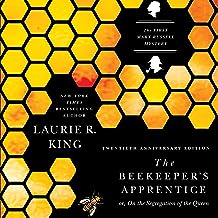 Book Title: The Beekeepers Apprentice, or On the Segregation of the Queen: Mary Russell and Sherlock Holmes, Book 1